This far inland the Indian River has narrowed to a tidal stream that meanders southward through an extensive area of low undeveloped land. The stream is bordered by salt marsh before it enters the Indian River estuary that continues down the east side of Crowley Island and into the Gulf of Maine. DCC should be contacted for information on access, and their contact information is below.

This project started in 2013 when PRWF was approached by an elderly Addison resident who wanted to sell the property; he had purchased it years before for hunting but was getting too old to use and enjoy it. We felt that this was a worthwhile property for us to protect because of its proximity to Crowley Island and its important forested fresh water wetlands and fringing salt marsh, ideal habitat for diverse wildlife, particularly for woodcock. Woodcock numbers are in decline in the northeastern United States, largely due to loss of habitat. In 2018 we also purchased the abutting property creating a project area of a little more than 250 acres.

In addition to the benefit to woodcock and other wildlife this conservation area has many characteristics which make it ideally suited to mitigate the effects of sea level rise caused by worldwide climate change and the increase in global temperatures. If there were no mitigation rising sea levels would drown many of Maine’s salt marshes and mudflats. Their rich food webs, so critical to waterfowl, shorebirds and wading birds as well as to clamming, worming and other local marine resource based livelihoods, would be lost.

According to Maine Coast Heritage Trust the upper Indian River is “one of the largest and most highly ranked marsh migration sites in the state”. The Conservation Area is located in a large low elevation area in the upper estuary where the river narrows to small tidal stream. The salt marsh along the stream’s 13,000 feet of frontage is bordered by low lying uplands; as sea level rises the salt marsh can shift gradually inland onto formerly dry land as it is flooded by the tides, a process called “marsh migration”. Under the scenario of a 1.0 meter sea level rise these and adjacent marshes are projected to grow and create some 249 net acres of new intertidal wetlands through migration into presently undeveloped land. A significant part of the Conservation Area can become new mudflats or salt marsh as sea levels rise.

Over time DCC hopes to add adjoining properties to advance its strategic objective of mitigating, to the extent feasible, the adverse impacts of climate changes on the tidal wetlands and saltwater marshes of the Indian River drainage and on their associated riparian zones and forests. Long term PRWF expects to cooperate with DCC to help build out this foothold with further conservation work in this area. 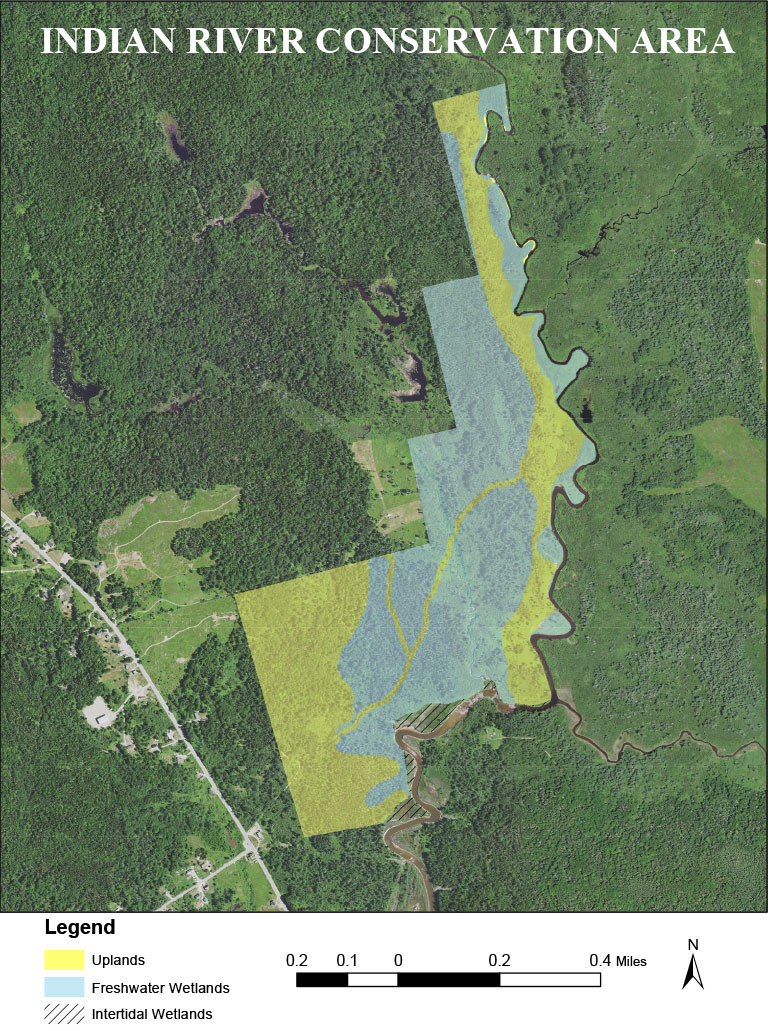 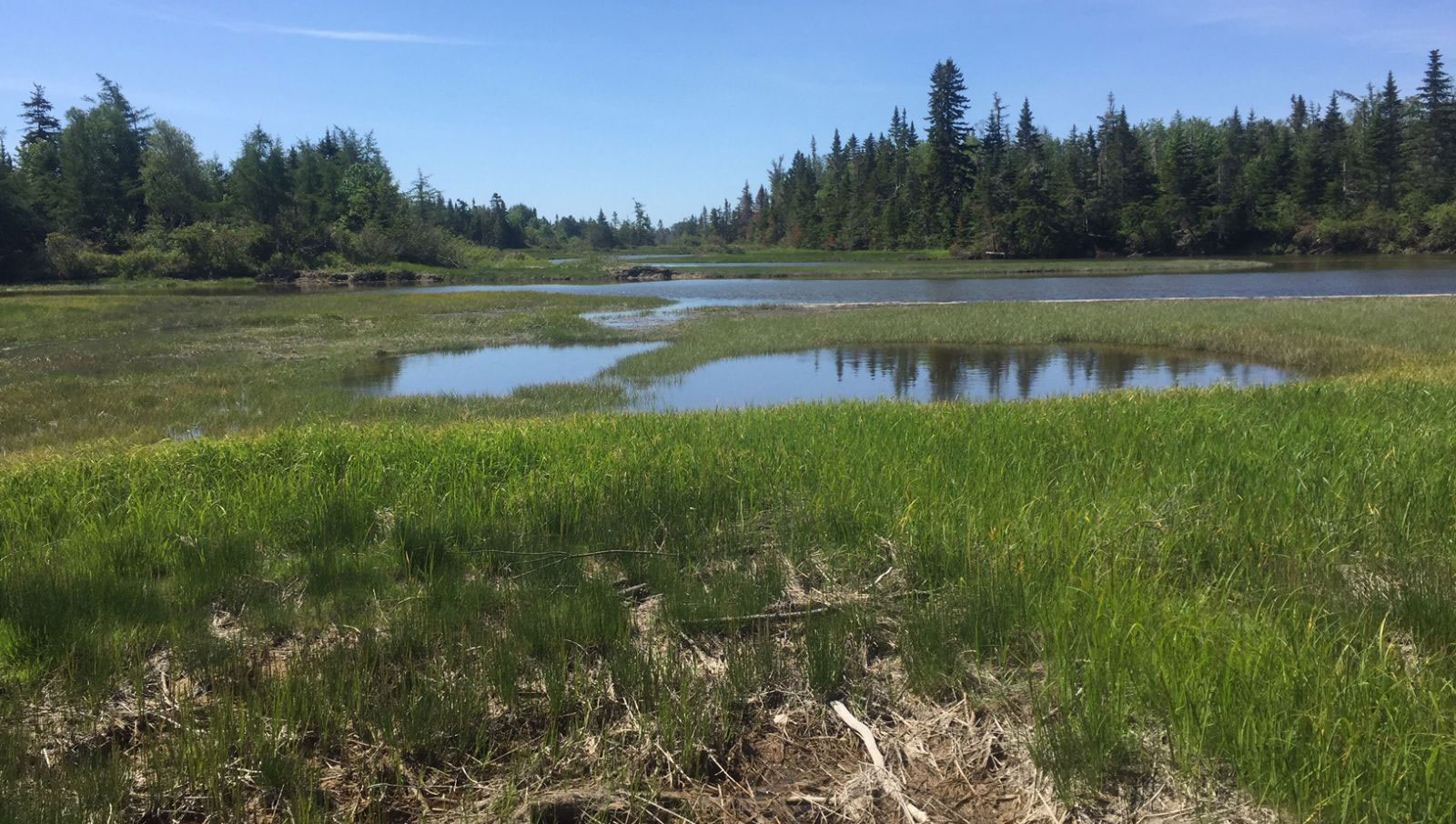 The dike in the foreground was built to control the water level in the marshes along the Indian River. There are pannes just over the dike and the river is in the distance.

Even where the uplands are covered with tall trees the land is not far above sea level. You can clearly see the remnants of dike that was built to facilitate the harvest of salt hay in the days when horses and oxen were used for farming. The property deeds refer to various farms that were located on the Indian River properties. 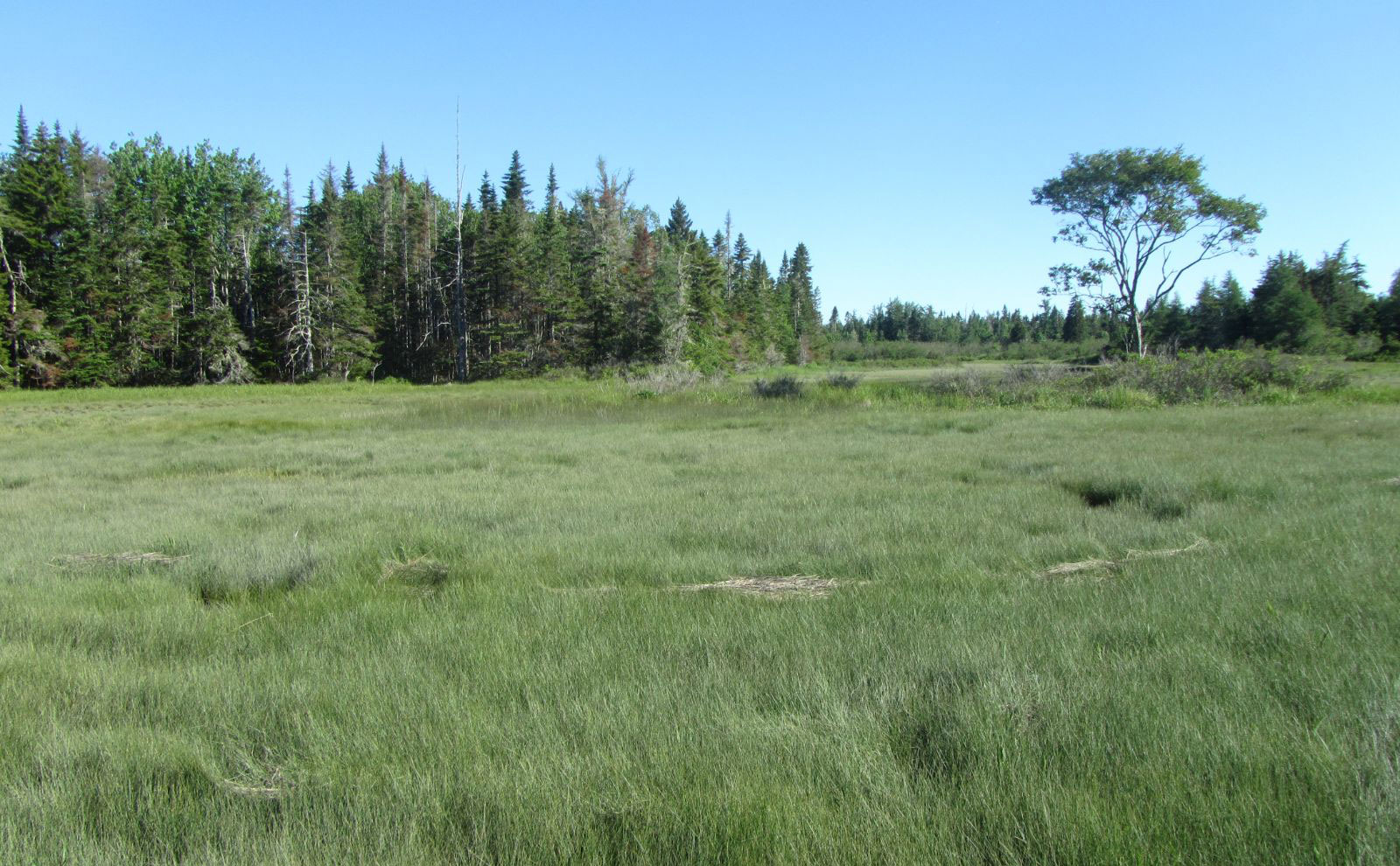 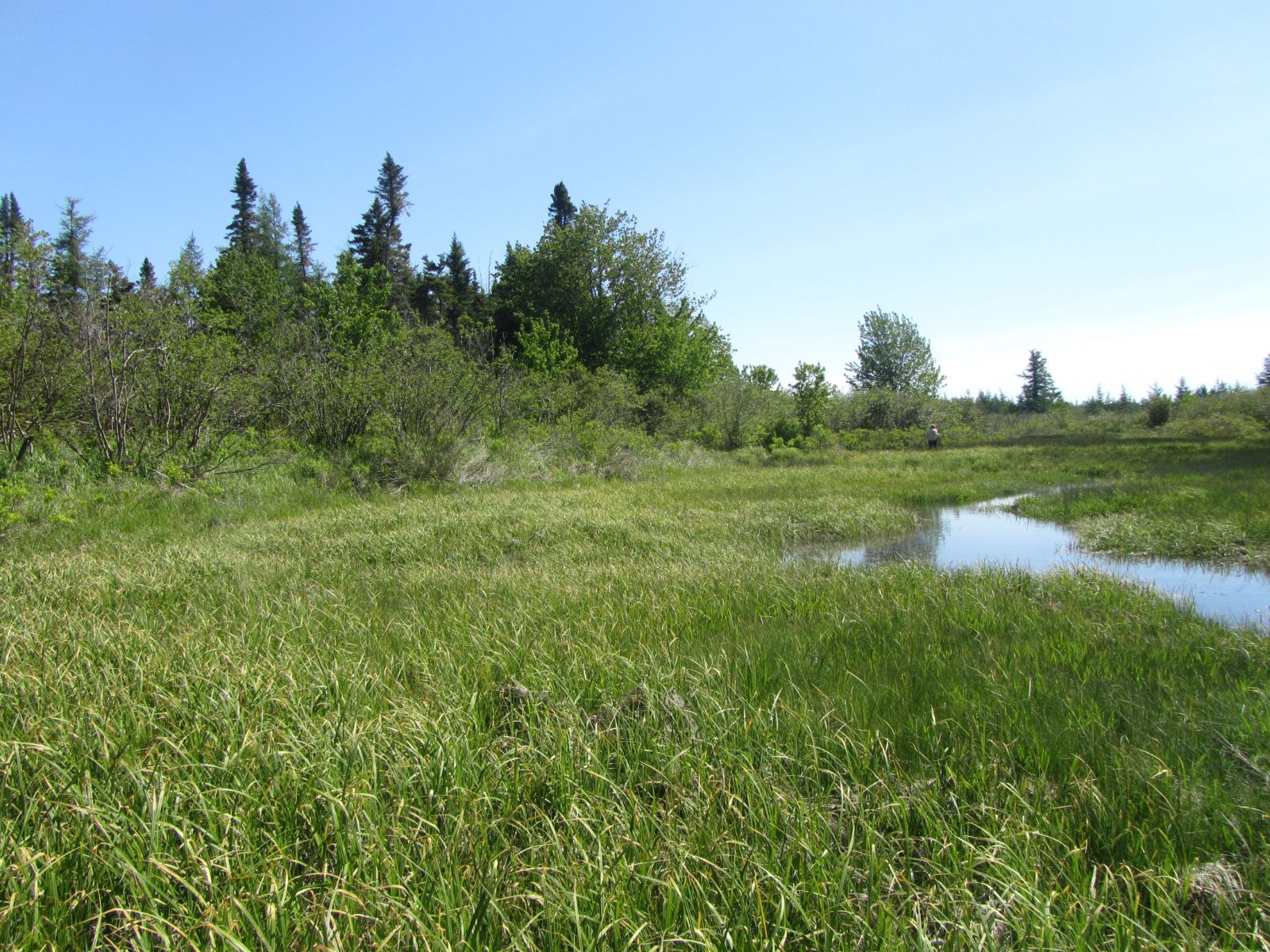 This shows the current saltmarsh with the abutting low-level uplands which will become new saltmarsh when the sea level rises and the marsh migrates inland.

The Indian River properties are almost 75% freshwater wetlands. There is lush vegetation and the land is crisscrossed by multiple small streams.