In 2008 a chance glance at a grocery store real estate ad showed listings for two large Jonesboro properties with prime waterfowl habitat on Mason Bay. PRWF’s founders already knew the area because they had hunted ducks there for many years and they recognized its remarkable habitat values. Supported by the Heads of the Estuaries Partnership (HEP), PRWF decided to make the protection of the entirety of the tidal upper part of Mason Bay our next major effort.

In 2009 PRWF was able to purchase the two properties advertised in the ad plus two additional lots with the help of funding from a USFWS Coastal Wetlands grant and a Land for Maine’s Future Program grant. Closings took place in late 2009 and the creation of the MBCA had begun.

During the next 10 years PRWF wrote 6 more federal grant applications, another LMF application, two major NGO grant applications and purchased 18 more properties in Mason Bay including three as recently as July 2018. The MBCA now includes 630 acres of uplands and 260 acres of freshwater and inter-tidal wetlands. There are 1.4 miles of streams and almost 5.5 miles of salt water shore frontage.

This project is significant because it protects a large, almost contiguous, block of undeveloped land which will protect more different species, and more of any given species than the same amount of acreage broken into smaller lots could support. Particularly important is the fact that the long, continuous stretches of shorefront which are protected from development will provide a haven for shorebirds, waterfowl and wading birds that are very sensitive to disturbance and have difficulty living in close proximity to people.

The salt marshes and intertidal mudflats in Mason Bay and those along the nearby Pleasant and Indian Rivers in Addison support rich food webs that are critical to waterfowl, shorebirds and wading birds as well as to clamming, worming and other local marine resource based livelihoods. Because climate temperatures are increasing and sea levels are rising the marshes and flats face the possibility of being resulting in the loss of important habitat. However, these three estuaries offer some of the best opportunities in coastal Maine to resist flooding and mitigate the effects of climate change.

The MBCA parcels have shorelines that are relatively low lying and made up of glacial till, sand, gravel and clay and that erode easily. As the sea water rises the marshes can migrate inland into undeveloped interior uplands. At the same time erosion of the shores will release fill into the bay that combines with organic material from salt marsh grasses to form peat, helping marshes and flats also to grow vertically. While old marsh drowns, new marsh is created and the critical habitat remains.

The MBCA provides the greatest benefit to birds in the fall. In late summer migratory shorebirds can feed and put on weight for their long southerly flights and during the fall waterfowl can feed and rest without being disturbed. Non-migrating Black Ducks can continue to feed on the mud flats in the winter because even if the marshes freeze up the mudflats are usually ice free in the most bitter Maine weather. The vital feeding opportunities help ducks emerge from winter fat and healthy, ready to raise broods in the spring.

In addition to waterfowl habitat there is excellent woodcock habitat in the MBCA. Woodcock are migratory; many nest in the northeastern US and the Canadian Maritimes and migrate along the coast as winter approaches, reversing their route in the spring. Many of the MBCA parcels have large expanses of excellent woodcock migratory and nesting habitat. Soils along Maine’s coast are less likely to freeze in fall or spring than soils in inland areas because of the moderating effect of Gulf of Maine waters on local climate. Coastal habitats are thus especially valuable to a species that must probe the earth to feed.

The owners of the large lots east of White Creek had  logged the property years before PRWF purchased it. As a result we inherited one significant problem. To get the cut timber out they had built an earthen dam and road across White Creek, with two large culverts installed under the road to allow the creek to flow into Mason Bay.

After the logging was completed the road fell into disrepair, the gravel road bed washed into the stream, and beavers built a dam across the mouth of the culverts, preventing anadromous fish from accessing the upper reaches of the creek.

Removing the beaver dam, the problem culverts and the last vestiges of the crossing will restore unimpeded natural passage for several species of fish including sea-run brook trout, alewives, smelt and eels, all important to the ecological integrity of eastern Maine.  With the assistance of Downeast Salmon Federation PRWF hopes to remove the culverts and restore normal flow to White Creek in 2021.

As with Pleasant Bay PRWF needed a long term plan for the ownership and management of an important project like the MBCA. We are in the process of transferring all the MBCA properties to Maine Coast Heritage Trust which will be able to provide better permanent protection for the properties and the wildlife that it supports than we could. Also we feel that MCHT will have staff that can create recreational opportunities for the public that are compatible with the primary purpose of preserving wildlife habitat. 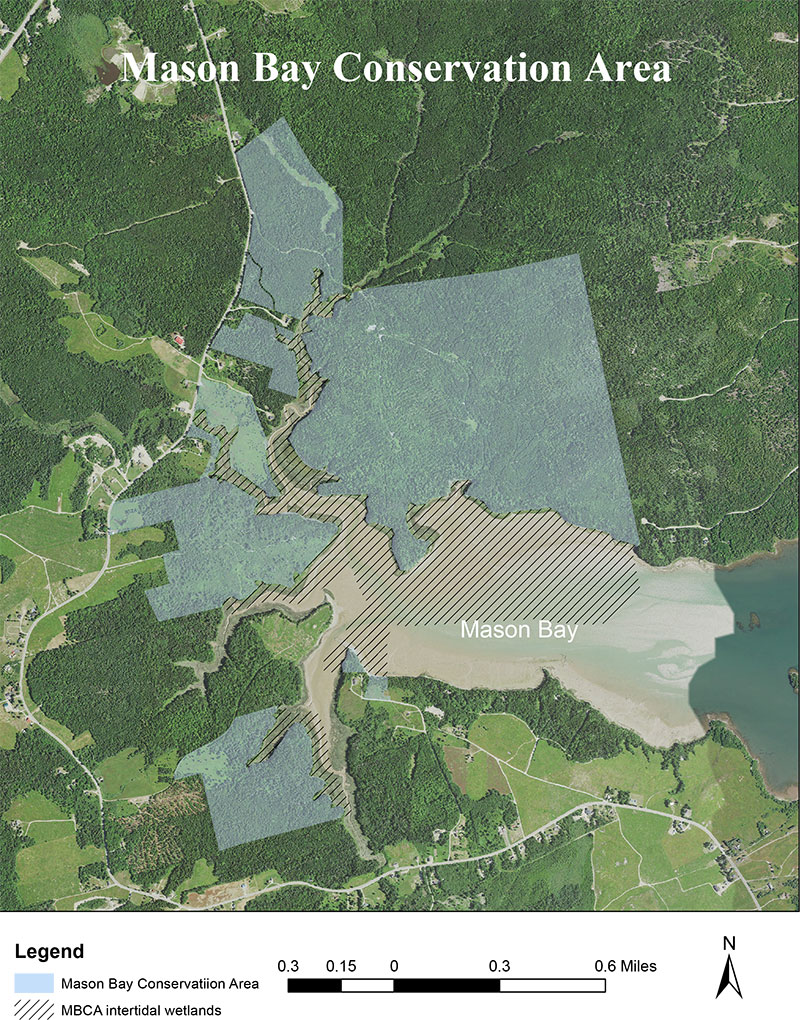 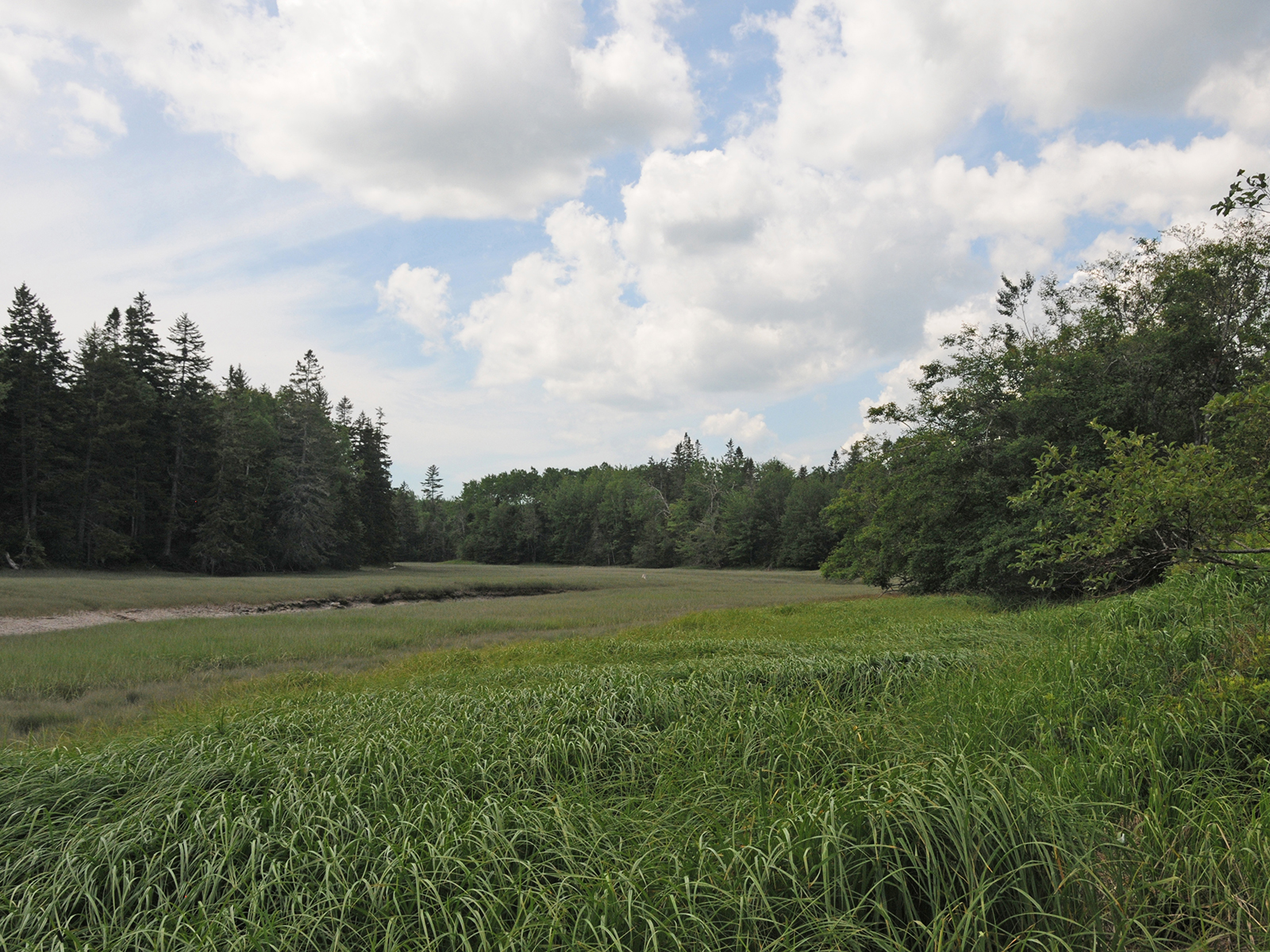 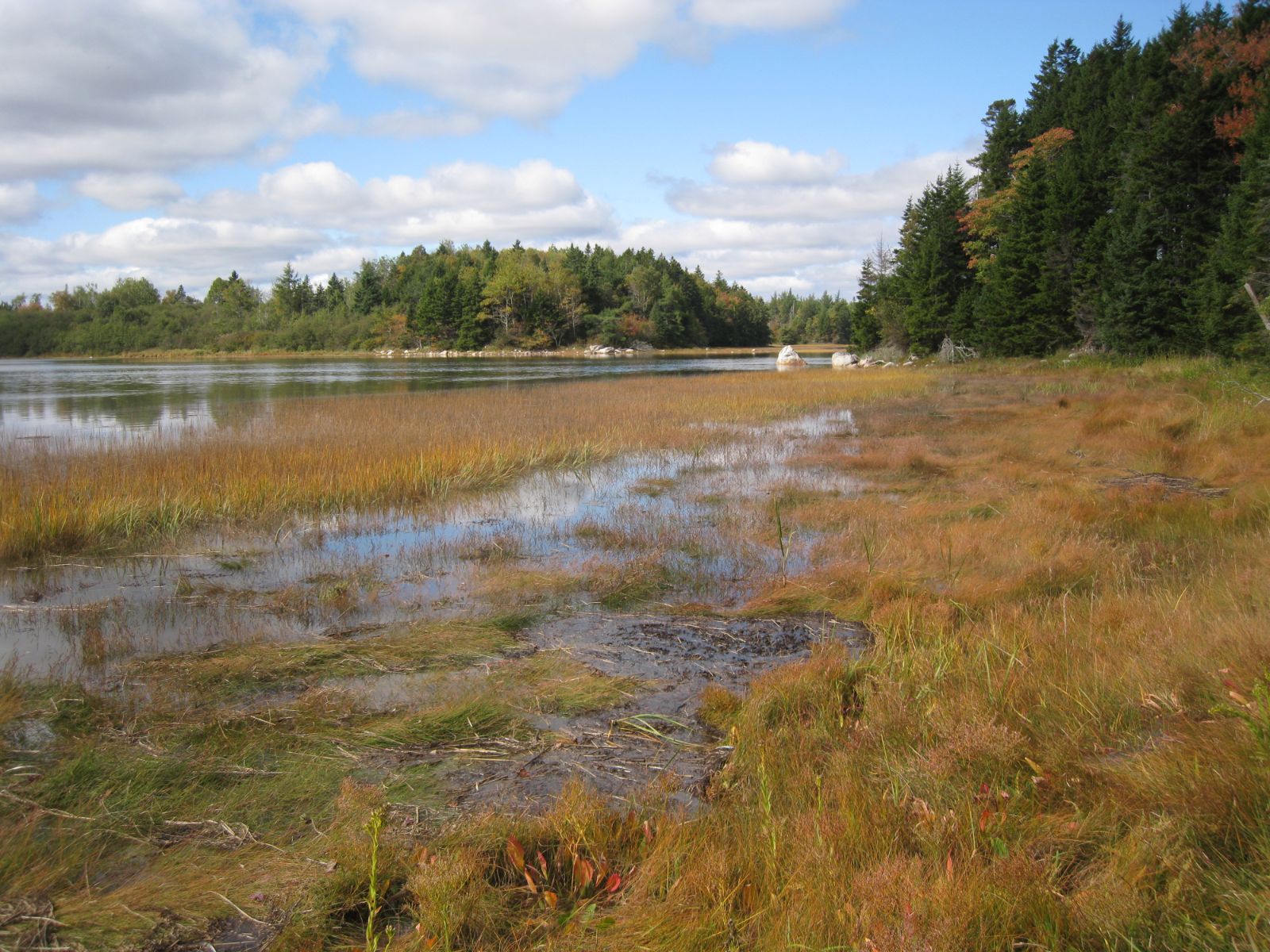 The shores of Mason Bay are fringed by salt marshes which are beautiful in both the spring and the fall. Marshes provide small invertebrates and autumn seeds as food for shorebirds and waterfowl as well as contributing detrital matter to feed the estuary. The annual crop of marsh grasses helps the marsh to grow vertically by building up peat beds, thus opposing rising sea levels. 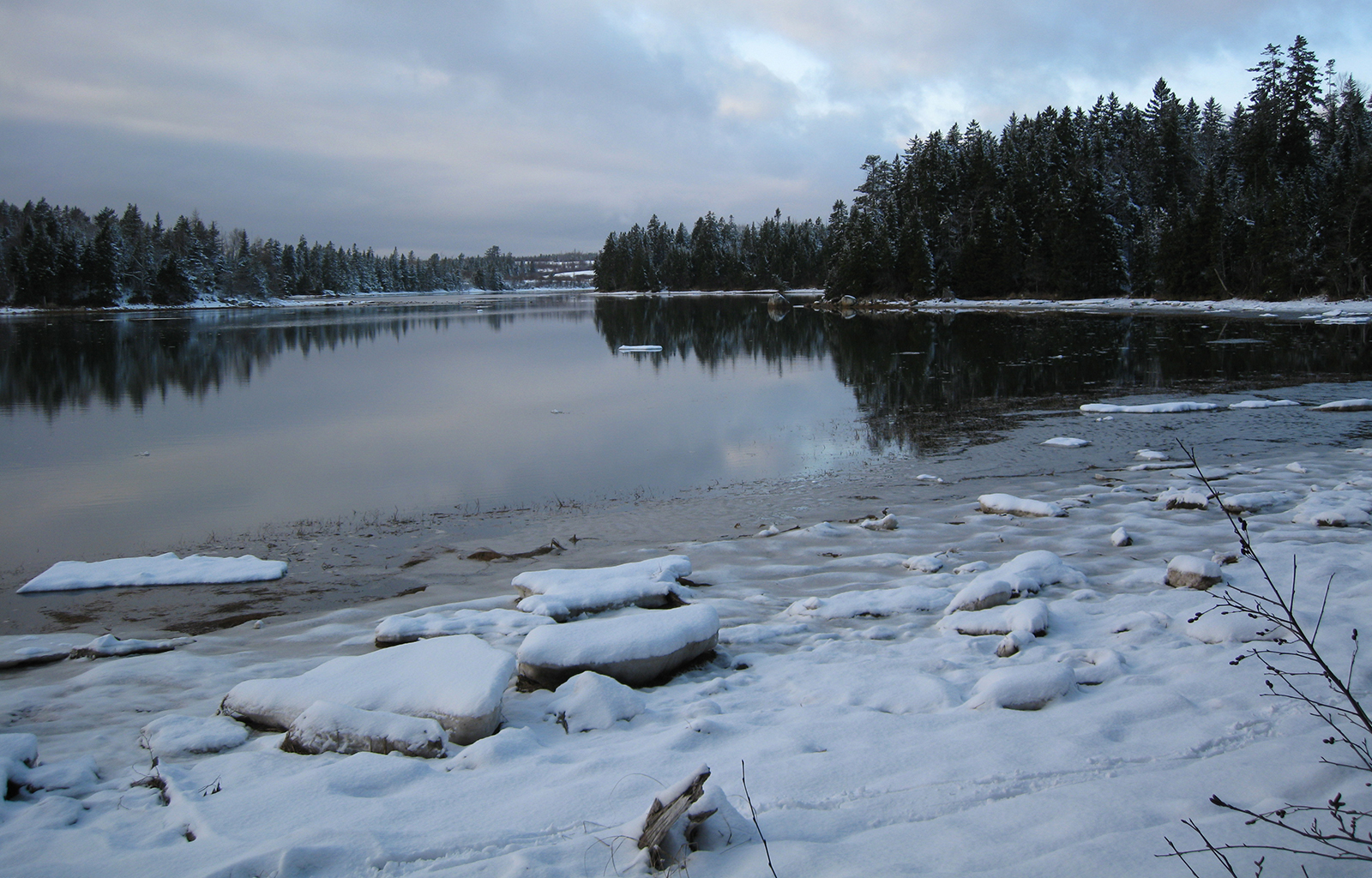 The waters of Mason Bay stay open even in the cold of winter affording safe resting and feeding areas for waterfowl. 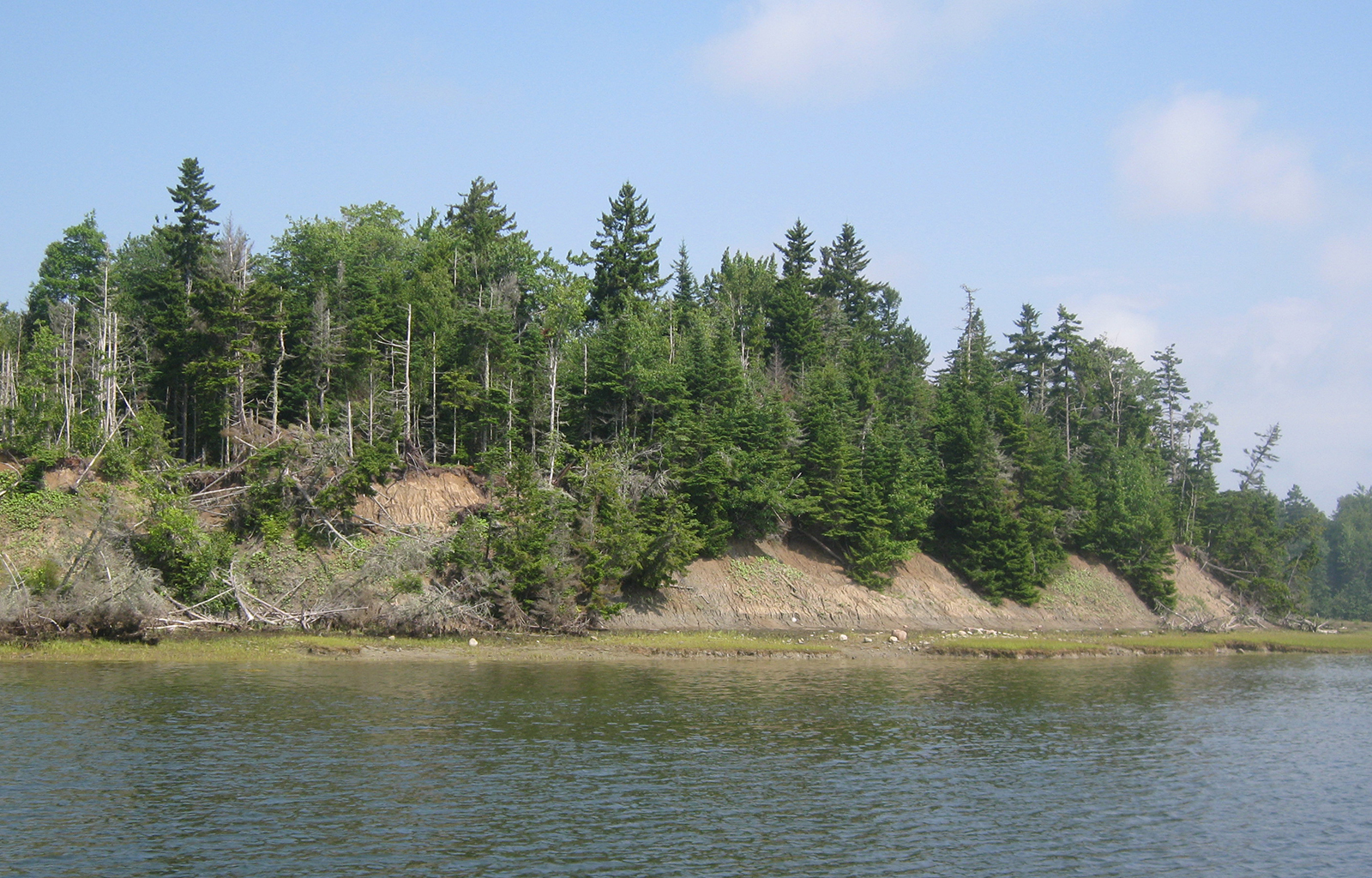 Clay Point is made of clay and gravel which erodes easily as sea levels rise thus helping raise the height of marshes and mud flats. 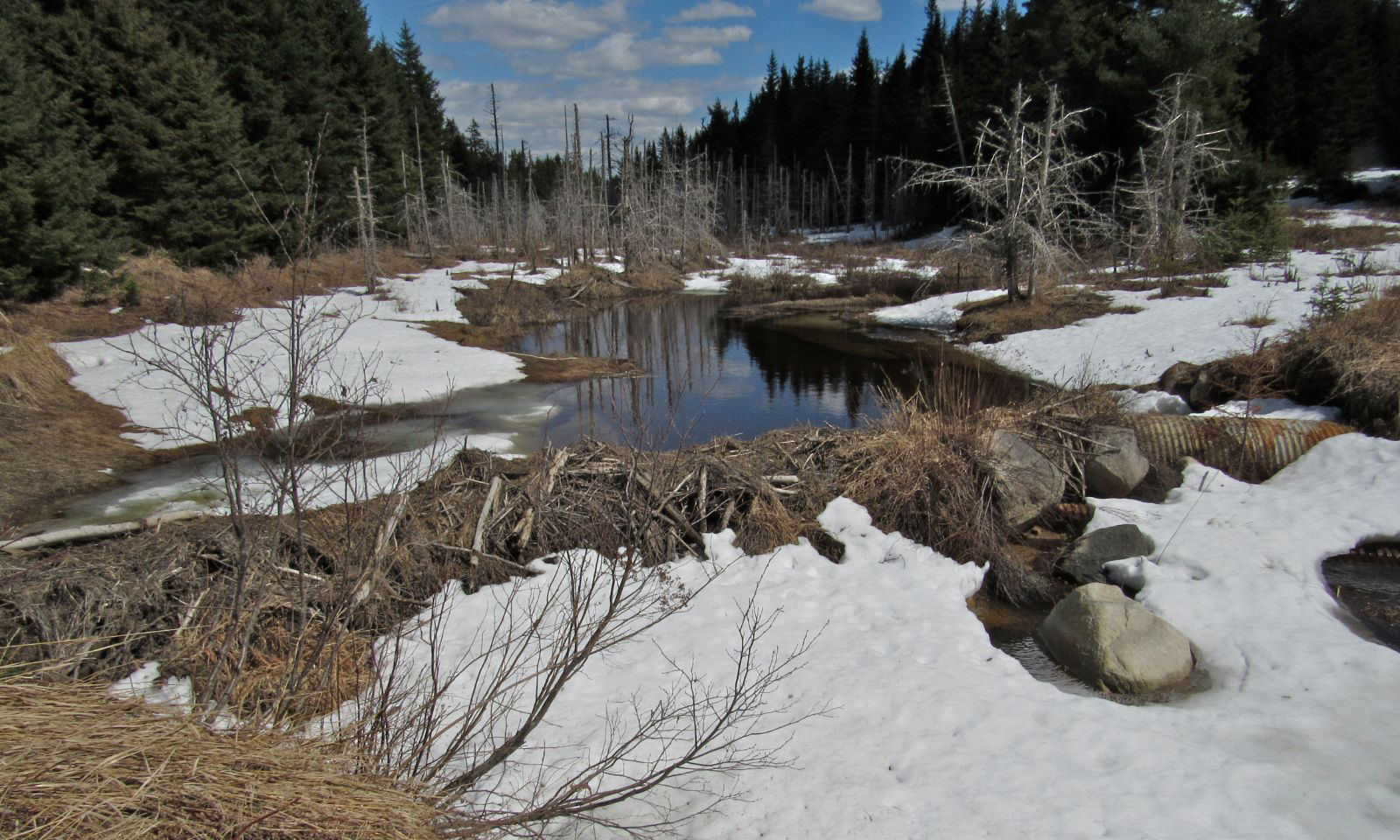 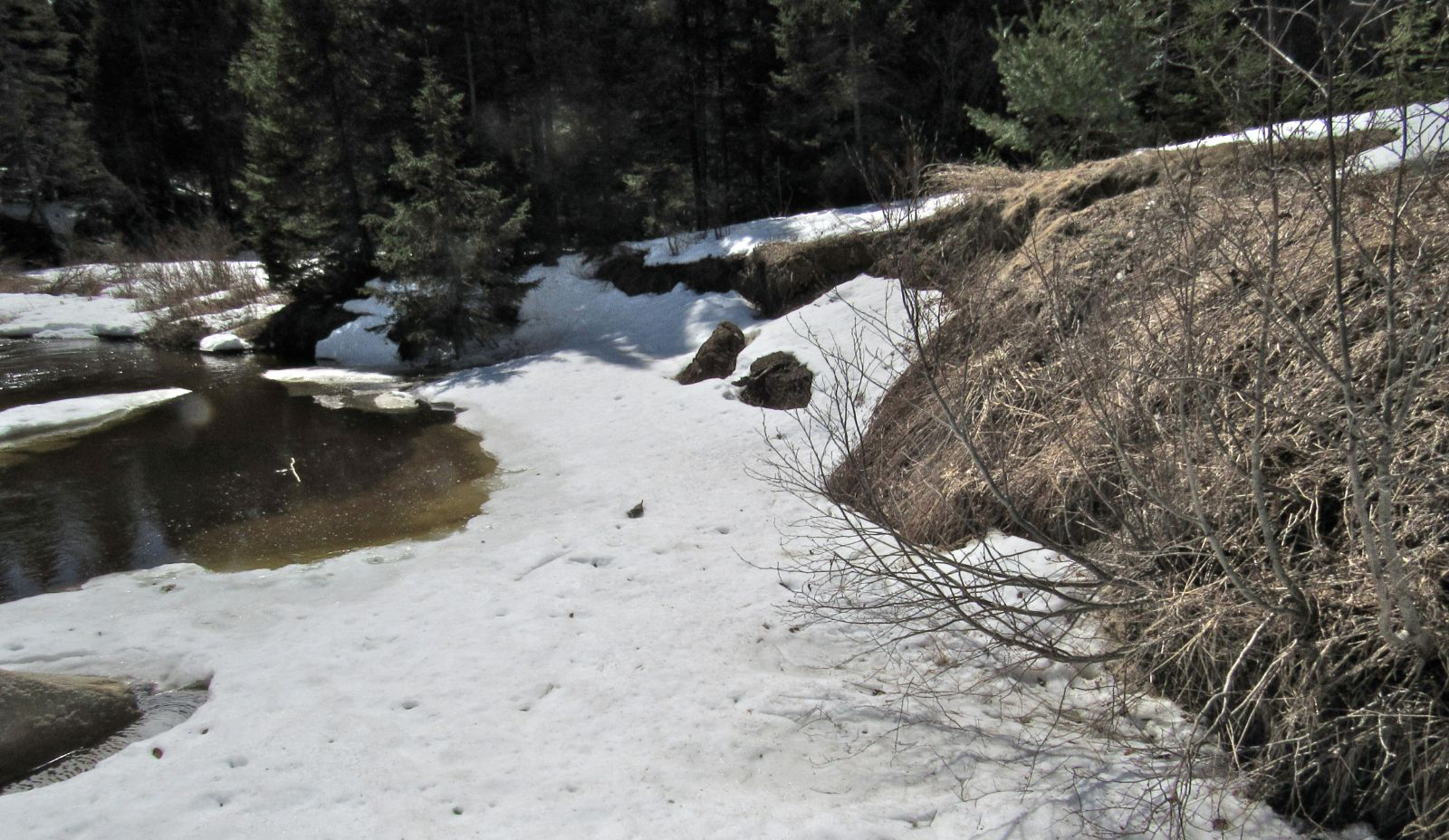 The photo on the left shows the old culverts and the beaver dam that block the creek. PRWF hopes to remove them in 2021 thereby restoring normal flow to the creek. Work will need to be done to stop further erosion of the bank shown in the photo on the right. After this is complete we hope the fish will return to the creek and be able to spawn.