Rockweed (Ascophyllum nodosum) is a seaweed that grows attached to intertidal rocky bottoms and ledges along the coast of Maine and most North Atlantic shorelines. Mature rockweed, growing four to six feet tall, functions like a tropical rainforest as a habitat for a multitude of dependent species.

Its leafy canopy is buoyed by small balloon-like structures that spread the bulk of its biomass near the water’s surface. Like the trees in a ​person’s woodlot Rockweed is not public property ​in Maine. ​The Maine courts have affirmed that the owner of the intertidal land owns the Rockweed growing on it. ​In Maine the upland owner ​normally owns the intertidal land ​fronting on their property. ​Thus rockweed is the private property of the abutting shoreland’s owner. 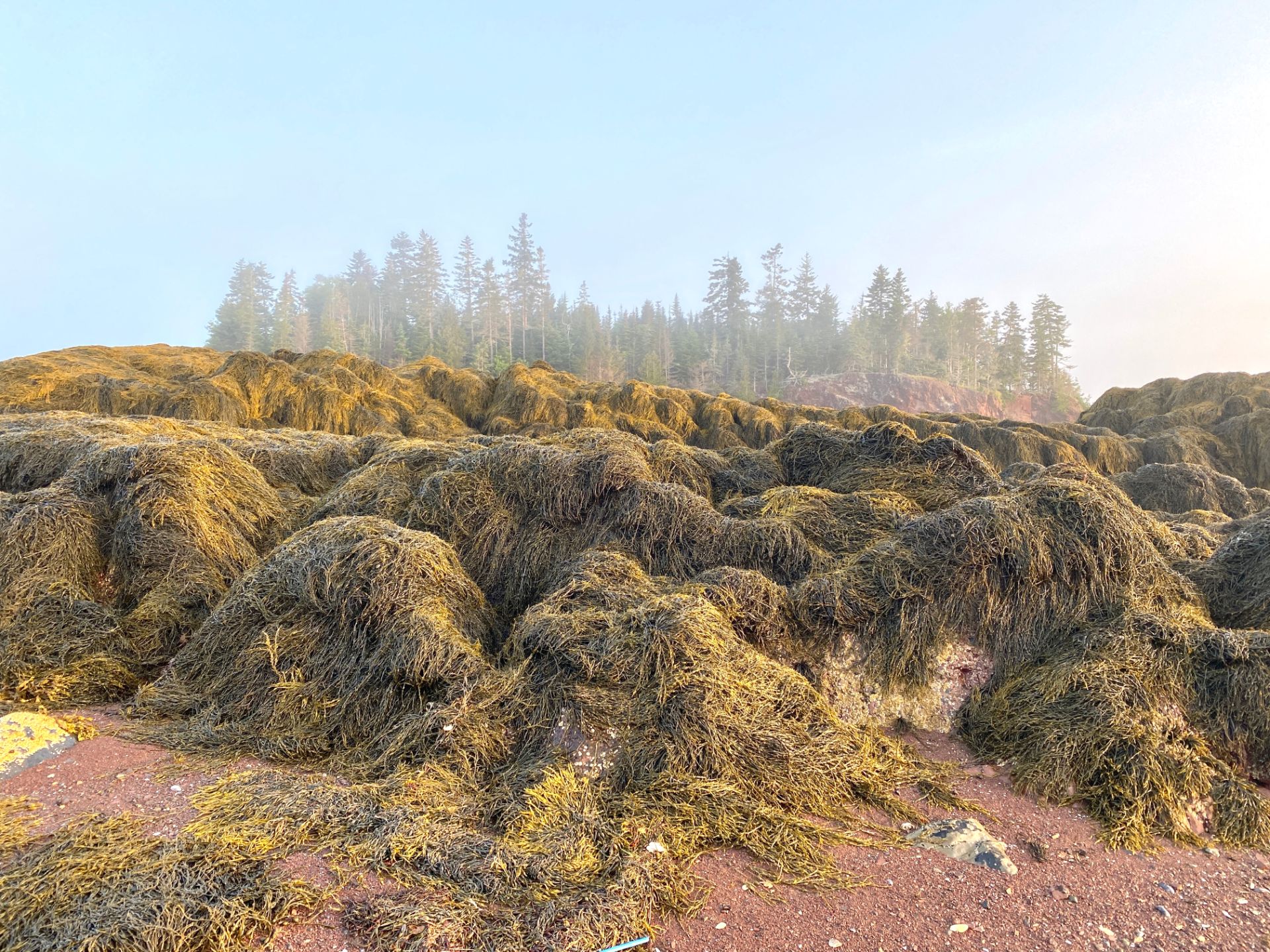 For about three hours each side of low tide, the rockweed is out of the water. Its canopy floats near the surface when the tide comes in.

Why is Maine’s Rockweed Important?

Rockweed is important to the Gulf of Maine ecosystem because it provides nurseries, shelter and sustenance to over 100 dependent species – small invertebrates, shellfish, fin-fish, shorebirds, waterfowl, and seabirds, including Species of Greatest Conservation Need in Maine (Dept. of Inland Fisheries and Wildlife, State of Maine).

Rockweed is important for Maine’s marine based economy because it provides nursery habitat for species of great economic value like Lobsters, Pollock and Cod and foraging habitat for all life stages of Periwinkles.

Rockweed is important for waterfowl because it provides food and security from predators for baby Eider Ducks too fluffy to dive for their food and access to winter food for Black Ducks. 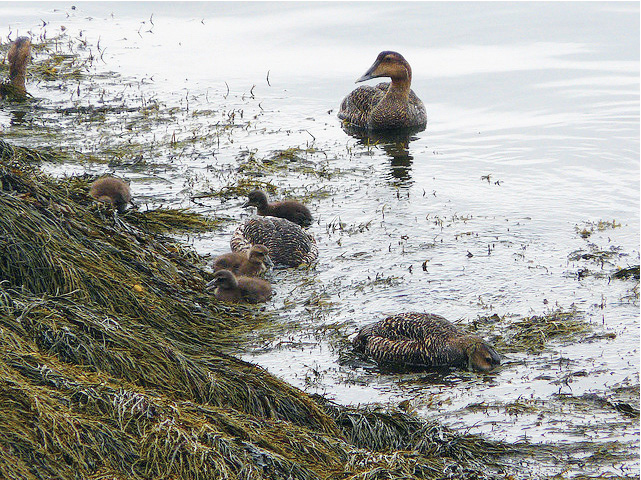 Baby Eiders feed on small invertebrates in the Rockweed and hide from predators in its canopy.

Among our shore birds Purple Sandpipers are particularly dependent on rockweed, feeding voraciously on invertebrates in the canopy throughout our harsh winters. “This is a dweller on the sea ledges, truly named the ‘Rockweed Bird’ for on the brown and slippery masses of seaweed on the deep water ledges he finds the snails and marine creatures which furnish his table.” (Rich 1907) 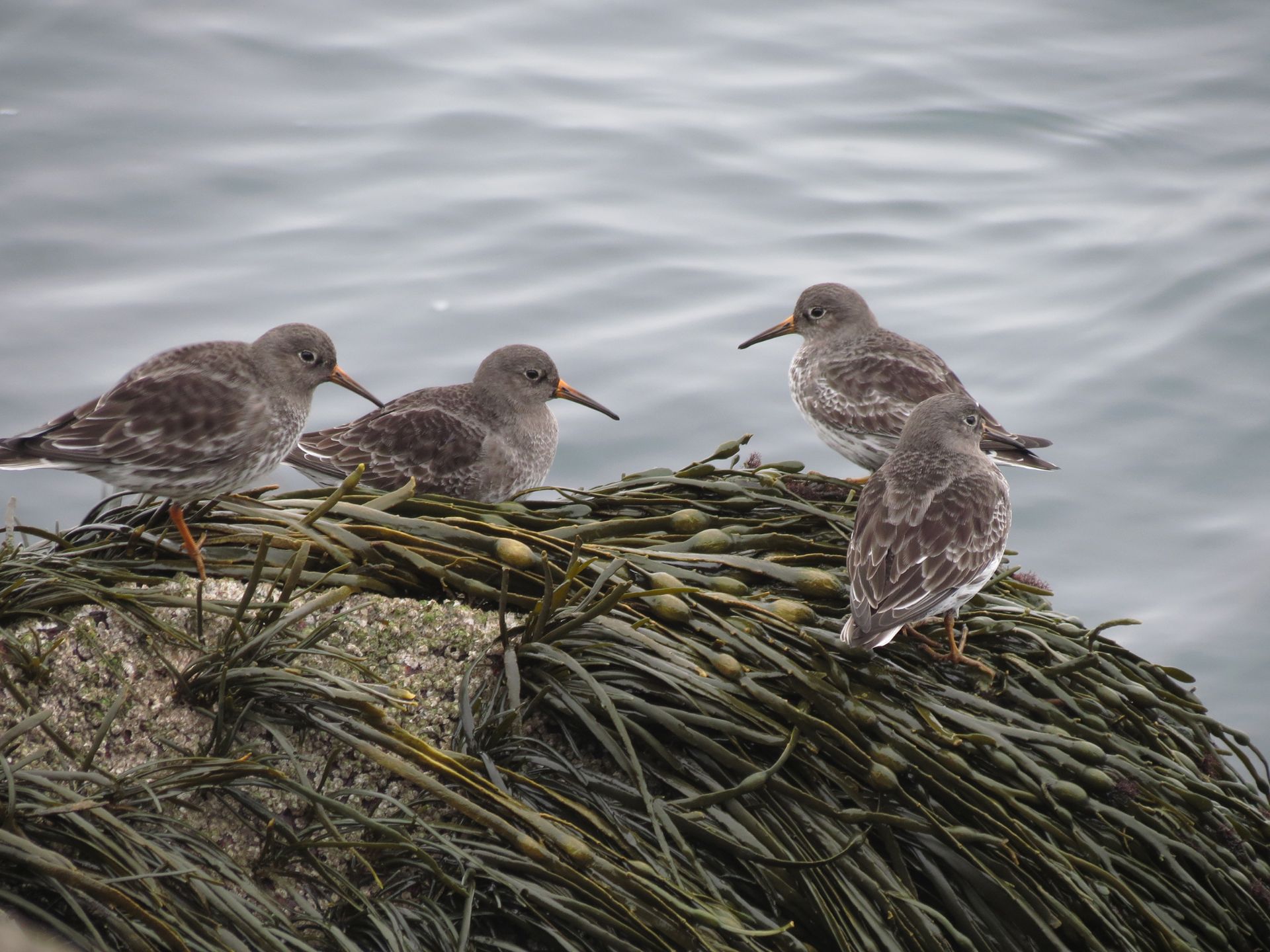 Purple Sandpipers are the only shorebird to winter over in Maine. They find their food in Rockweed beds when flats and marshes ice over. Their population in Maine has dropped dramatically in recent years.

Rockweed is an essential contributor to the Gulf of Maine food web. Each year Rockweed plants capture solar energy and use photosynthesis to convert hundreds of thousands of tons of atmospheric carbon dioxide into nutrients. Each plant creates new biomass equal to its own weight and annually it sheds this new organic material back into our estuaries. Here it breaks down and nourishes the small invertebrates on which larger organisms feed. Rockweed is the largest single contributor of biomass to Maine’s marine food web producing and releasing on the order of one million tons of nutrients each year.

Since before colonial times Mainers have cut modest amounts of Rockweed for fertilizer for their coastal farms. Because the amount cut was small the cutting provided no threat to Rockweed’s sustainability as an essential part of the ecosystem. However, over the past 20 years commercial harvesting has increased exponentially to become a big business, one that today alters the structure and function of the coast’s Rockweed beds.

The harvesters, the largest of them Acadian Seaplants Ltd based in Nova Scotia, have treated Rockweed as a free resource, inexpensive to cut and very profitable when converted to value-added garden fertilizer or animal feed supplements. Many Maine citizens are distressed that cutting still takes place on private intertidal lands without permission from or compensation to the landowners, despite the 2019 court decision.

Scientists in the US and Canada are concerned because commercial cutting at the current rate may be unsustainable and might lead to nutrient depletion to Maine’s coastal ecosystem and direct damage to dependent species. There are many past examples of excessive exploitation of marine species creating lasting damage (Cod and Sea Urchins are two) and of the unwillingness of either the fishermen or the government to act in time to save the species.

What Has Been Done to Protect Rockweed?

Initially PRWF and a number of other conservation organizations attempted to work with Maine’s Department of Marine Resources (DMR), which has broad regulatory authority over the harvesting of marine species, to develop an ecosystem based framework for taking rockweed. However DMR refused to recognize that Rockweed is private property and worse, refused to listen when experts from Canada and the US challenged their industry-friendly idea of “sustainable harvest” as inconsistent with preserving its ecosystem functions.

When working with DMR failed, PRWF supported several concerned Maine landowners in taking Acadian Seaplants of Nova Scotia, the largest of the commercial harvesters, to court. We sought a ruling confirming the private ownership of Rockweed and the illegality of cutting without permission. Such a ruling would put Rockweed in the same legal position as terrestrial forests, protected by private property rights but subject to harvest under stumpage contracts with willing land owners. DMR promulgated rules on things like the amount of take and seasonal limits would also apply. Land trusts could decline permission to harvest on their preserves.

In March of 2017 the Washington County Superior Court ruled that Rockweed belongs to the owners of the shoreland and could not be taken without permission. Acadian Seaplants unsuccessfully appealed the ruling and in March 2019 the Maine Supreme Judicial Court, Maine’s highest court, unanimously confirmed that Rockweed is private property.

We and our conservation partners have celebrated the court’s decision because it confirms our right to protect the rockweed growing on our preserves from wanton exploitation. However these victories are only on paper as commercial cutting has continued. DMR has recognized the 2019 court decision and yet, to date, has made no meaningful attempts at enforcing the court decision.

For more detail on the court case, click here.

During the summer and fall of 2019 PRWF was very active along with MCHT, the Rockweed Coalition and other partners in helping forestall ill-advised efforts by the Maine legislature to attempt to overturn the Court’s explicit ruling. We have also supported efforts by the landowners who brought the original 2016 suit to engage with DMR on a plan to enforce the court ruling and protect landowners’ rights. DMR has so far refused to commit to any plan. In fact DMR has consistently refused to ticket or prosecute scofflaw harvesters.

As an example, two Cobscook Bay landowners actually documented illegal harvesting on their land in the fall of 2019 with photos and videos. They complained to DMR and they and their attorney followed up repeatedly but the Department apparently has taken no action. 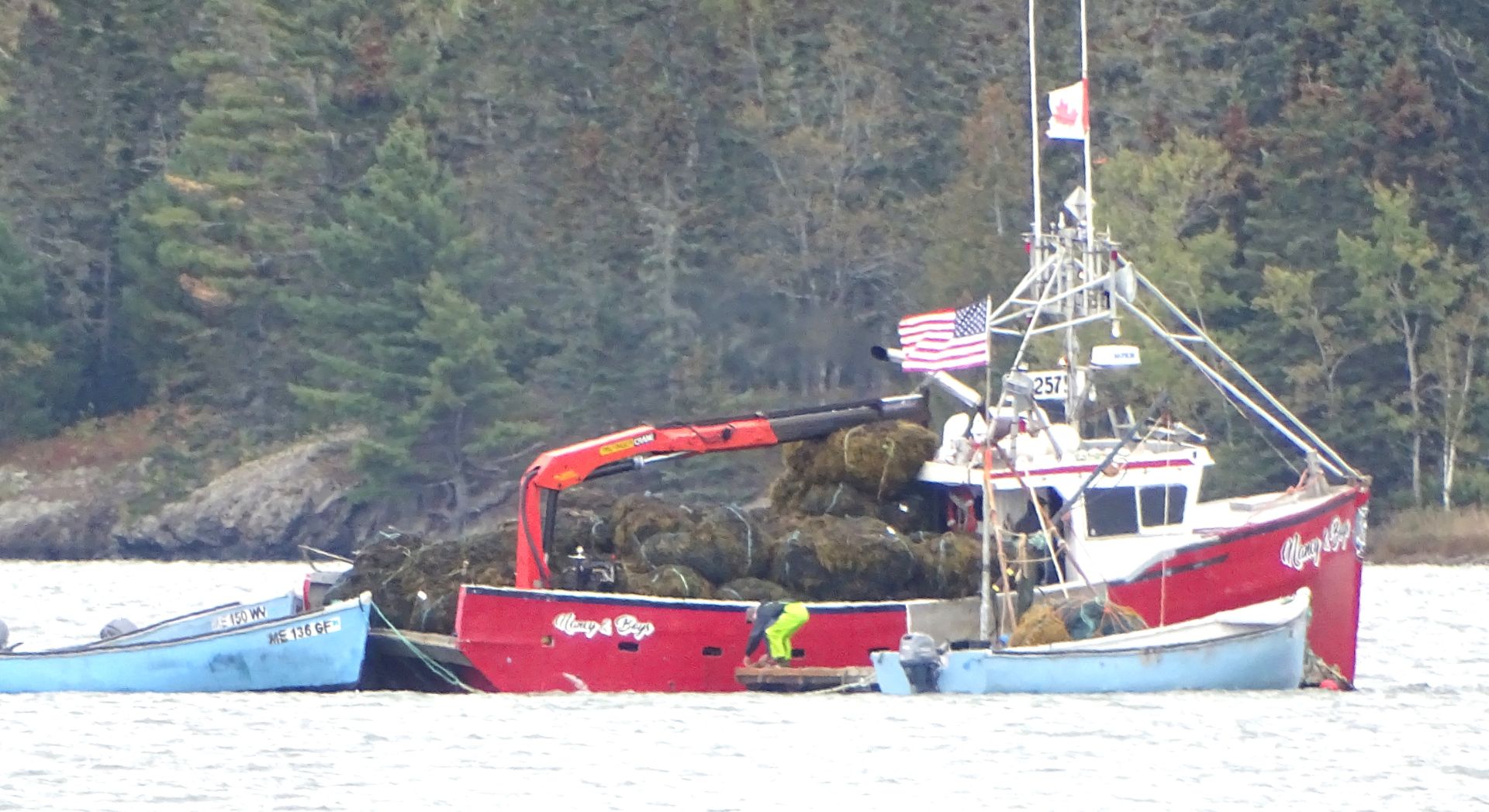 Maine Rockweed Headed for Canada for processing for fertilizer and animal feed.

Furthermore, DMR has deleted reference to rockweed’s legal ownership from its 2020 harvest license application. This deliberate omission of the previous disclaimer leaves the harvester with the clear but incorrect impression that DMR has the authority to give permission to cut without the permission of the owner. During the 2020 season, lacking adequate law enforcement, we can expect a further period of illegal cutting.

For more information go to saveourseaweed.squarespace.com (you will be taken to another site).