At PRWF, we are committed to identifying, protecting and stewarding high value nesting, migratory and wintering habitats for waterfowl.

Our successes directly support the survival of most of the waterfowl seen seasonally throughout the Atlantic Flyway. We focus particular attention towards protecting habitat for Black Ducks – Maine’s wary, tenacious and hardy year-round residents. 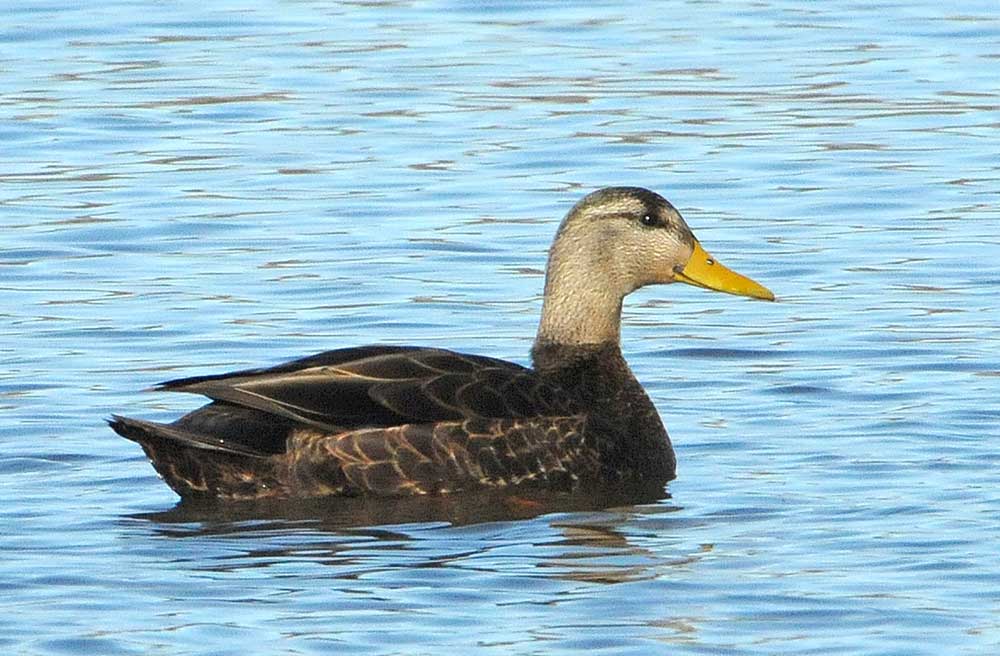 At least 28 species of waterfowl, nearly all those regularly seen on the Atlantic flyway, are at least occasional visitors to Northeast coastal Maine while some 17 species depend on our local habitats for at least one essential component of their annual life cycle. However, according to the US Fish and Wildlife Service’s North American Waterfowl Management Plan “The loss and degradation of habitat is the major waterfowl management problem in North America....Eastern Maine is a habitat area of major concern.”

Our salt marshes and nearby freshwater wetlands provide important nesting habitat for several species. One of the most important is the Black Duck, an iconic species to New England water fowlers and bird lovers. Black Ducks are ground nesters, preferring secluded woods and brushy margins near beaver flowages, marshes and streams to raise their broods. Northeastern Maine and the Canadian Maritimes are at the core of their nesting range. Mallards are also ground nesters whose range is shifting north and that increasingly rear broods locally. 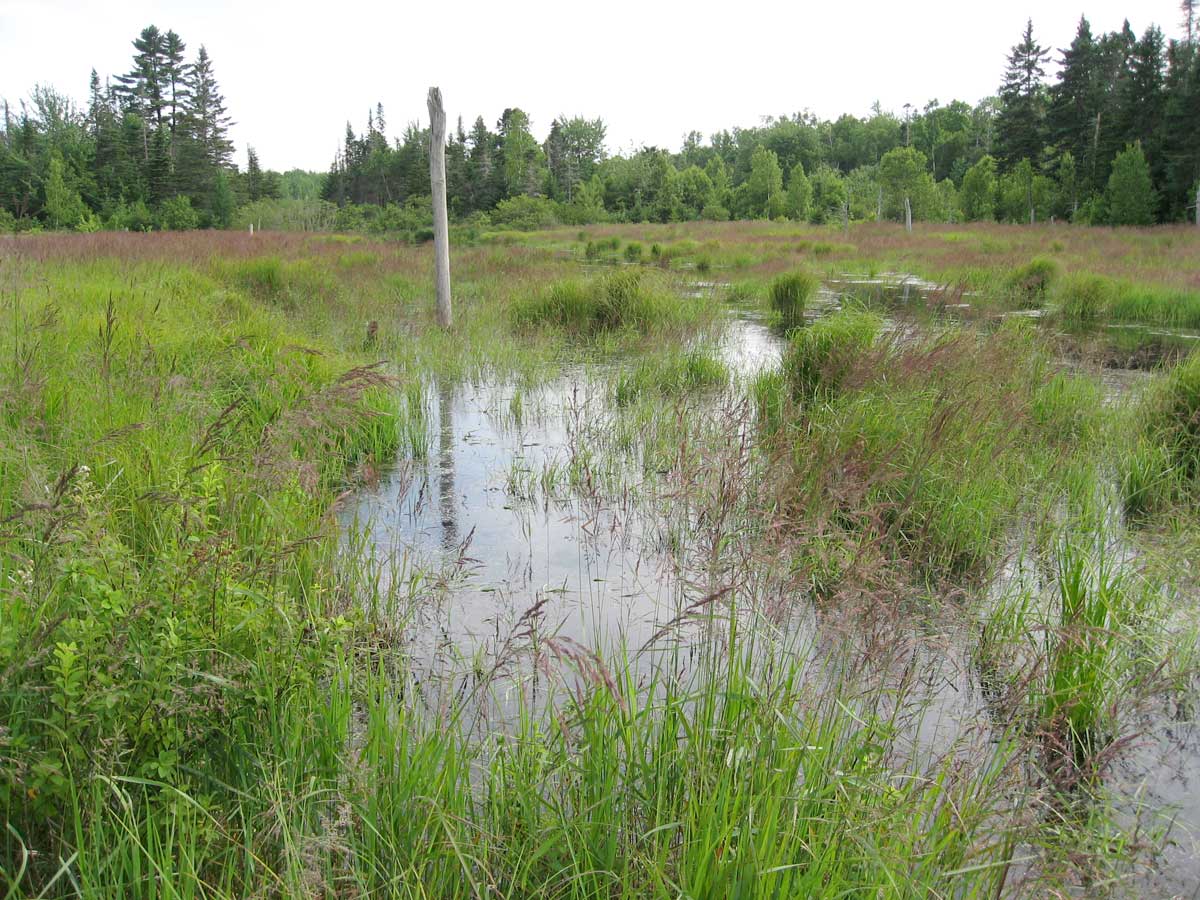 Freshwater Wetlands in the PBWMA provide nesting habitat for ducks

Wood Ducks are a recovering species now common in our part of Maine, nesting in cavities in dead trees in or along the edges of fresh water wetlands or using man-made nesting boxes. Hooded Mergansers and, more rarely, Common Goldeneyes, are also cavity nesters that raise broods locally.

Canada Geese, once rare in eastern Maine, are now well established. Each spring more pairs can be seen nesting in open meadows and later swimming in local ponds and salt marshes with strings of goslings paddling behind.

Eider Ducks, our one locally nesting sea duck species, build simple nests just above the tide line on the shores of many islands at the mouths of the bays. The hens pluck down from their breasts to make insulating coverlets to protect their eggs whenever they leave the nest. Several hens will gather their ducklings together in the floating fronds of nearby Rockweed beds to feed and to escape avian predators. 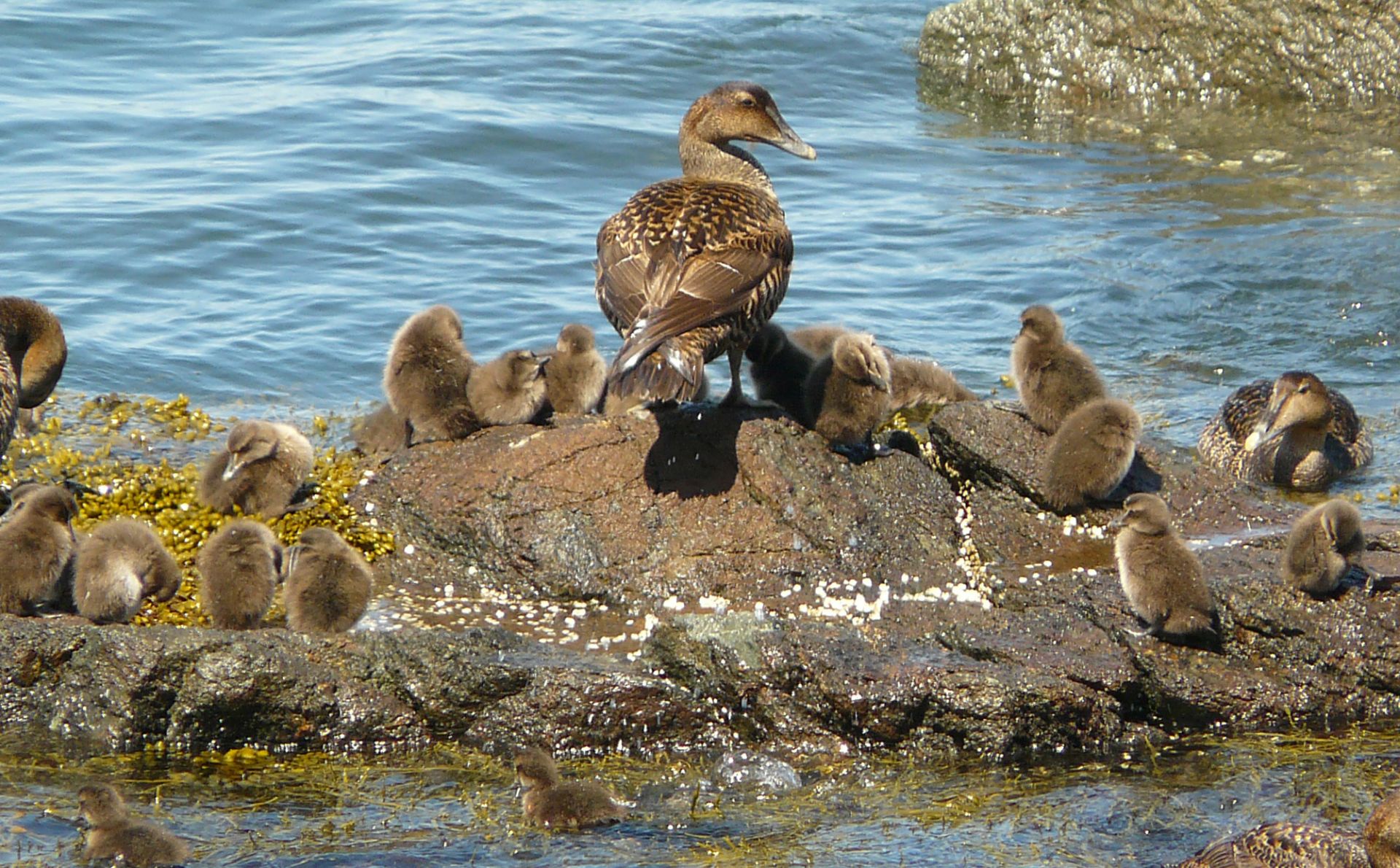 Hen Eiders and their chicks on an offshore ledge.

Locally nesting waterfowl tend to be widely disbursed over the landscape in spring and summer and are usually secretive while they are raising their young. By early fall, however, the young birds can fly and migratory flocks start to form, feeding and resting in beaver flowages and coastal bays and marshes.

Many new birds arrive here from the north during the fall migration, a protracted circus parade of waterfowl. Most stop relatively briefly to feed and fatten for their long flights to southern wintering grounds. Blue-winged Teal are our first harbingers of autumn, already heading south by Labor Day. Many thousands of Green-winged Teal follow in October feeding in our salt marshes and tidal flats and treating birders to breathtaking displays of high speed, close formation flying. By late October most of the locally nesting Wood Ducks and Hooded Mergansers have headed south along with the Teal. 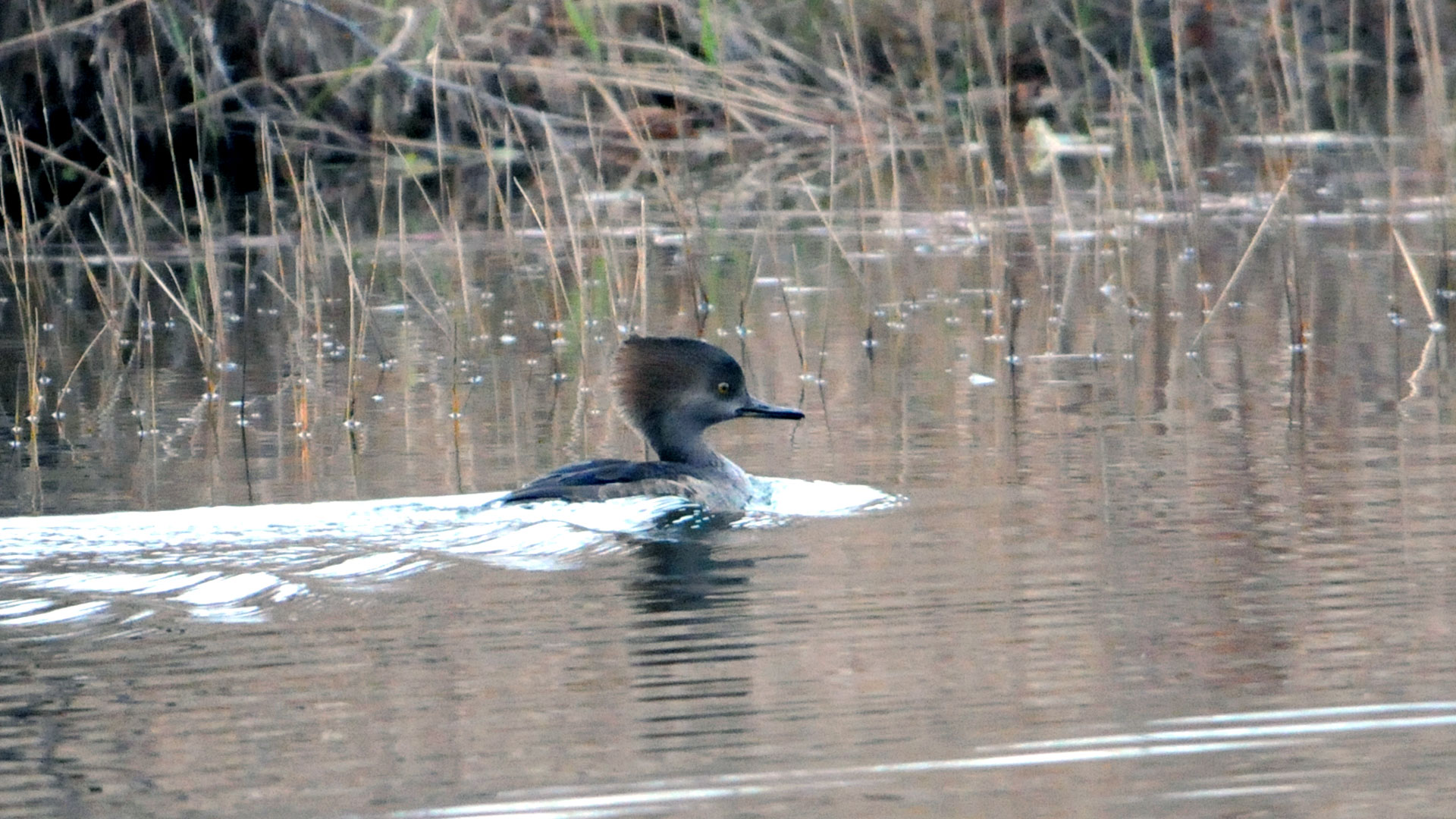 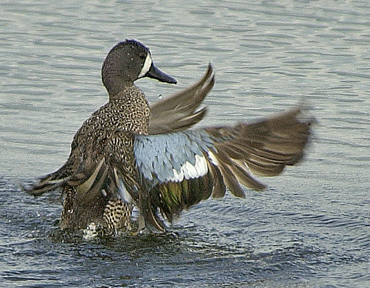 At the same time, seaward of the outer islands, flight after flight of Common Eiders, Surf Scoters and, more rarely, Black Scoters and White-wing Scoters hug the wave crests as they fight their way to the southwest against the prevailing winds. Many stop to rest and feed on mollusks in eastern Maine’s shallow bays and estuaries.

Mid-November brings the more hardy late migrants – jaunty Buffleheads, Goldeneyes and Long-tailed Ducks. These birds thrive all winter in our protected estuaries, diving for their meals along with local and migrating Eider Ducks.

Wintering habitat on Maine’s Downeast coast is most important for the Black Duck, an at-risk species of statewide, national and international concern. Black Ducks live almost exclusively in eastern North America; Maine’s Downeast coast now represents the heart of their year-round range. Black Duck populations have plummeted nearly 50% since the 1960’s and only recently have they appeared to stabilize. During October and November resident nesting Black Ducks have regrouped into large flocks and are joined by their brethren arriving from New Brunswick and Nova Scotia. When the inland flowages begin to freeze they gather along the shores of the bays and feed on invertebrates and the seeds of salt marsh grasses.

Research shows that it is the progressive loss of high quality winter feeding and resting marshes in the mid-Atlantic states and southern New England that has had such a serious impact on the Black Duck population. Black Ducks are particularly vulnerable in built up areas because they are exceptionally wary, intolerant of human disturbance and have exacting habitat requirements for feeding and resting in winter when their energetic needs are most demanding.

Maine’s estuaries now offer some of the most important remaining winter Black Duck habitat on the Atlantic Flyway, extensive food-rich intertidal mudflats and salt grass marshes and tidally exposed Rockweed beds. These beds rarely freeze over and suffer very little human disturbance and are the only place wintering Blacks can feed when salt marshes and mud flats are iced over. Unfortunately, they are increasingly threatened by aggressive commercial harvest of the rockweed.

Biologists believe that in response to the extensive loss of winter habitat to the south an adaptive shift is occurring in the Black Duck gene pool reducing the migratory instinct and favoring over-wintering in Maine. Flocks of several hundred Black Ducks are now commonly sighted during local Audubon Christmas Bird Counts. To the extent that the Black Duck species, already badly depleted, is now so dependent for winter nourishment on our estuarine habitats we have a particular responsibility to do our best to keep these flats, marshes and Rockweed beds pristine.